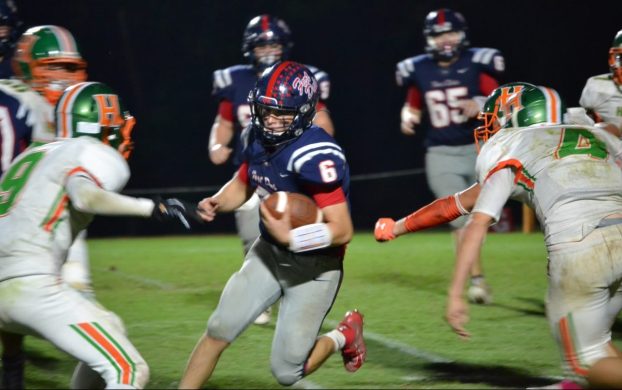 After securing the ball from an onside kick, Ethan Alford ran for a 50-yard rushing touchdown. With less than a minute into the first quarter, the Eagles led the Colts 6-0.

After securing another onside kick, the Eagles were back in control of the ball.

Set up at the 47-yard line, Sam Bloodworth successfully ran the ball out of bounds at the 18-yard line. From there, the Eagles scored again after Alford successfully threw the ball to Bloodworth.

After securing the extra point, the Eagles led the Colts 13-0.

Fort Dale attempted a third onside kick, but the Colts secured the ball at their 48-yard.

The Colts successfully ran the ball to the 14-yard line. After a false start penalty on the Eagles, Hooper Academy was first and goal near the two-yard line.   R.J Coker walked the ball into the end zone to score.

Fort Dale then received the ball back at the 42-yard line.

After running the ball to the 12-yard line, the Eagles scored again after  Alford made a successful touchdown pass to Noah Pickens.

The Eagles then went for their fourth onside kick of the game and successfully regained possession of the ball.

After running the ball to the 10-yard line, Fort Dale extended their lead further after a successful touchdown pass by  Alford to  Bloodworth.

Following the return, the Colts managed to secure a touchdown and shorten the Eagle’s lead 27-13.

At the start of the second quarter, Fort Dale managed to score again after a rushing touchdown by Alford.

With less than two minutes left in the second quarter, Hooper running back Zach Rusley shortened the Eagles lead 34-20 after securing a more than 60-yard rushing touchdown.

Upon gaining possession of the ball again, Fort Dale scored another touchdown by Alford.

An interception by Fort Dale led them to score during the last play of the first half with a  touchdown pass from  Bloodworth to Alan Alverez.

At the end of the first half, Fort Dale led Hooper Academy 47-20.

Neither team scored in the third quarter.

At the start of the fourth quarter, Alford scored for Fort Dale following an interception.

Following the punt return, the Colts managed to run the ball downfield for a touchdown.

The Colts were then trailing the Eagles 54-27.

With three minutes left in the fourth, the Colts managed to score again after securing another rushing touchdown and a two-point conversion.

At the end of regulation, the Eagles walked away with the win 54-35.

Fort Dale will face off against Monroe Academy at home this Friday.