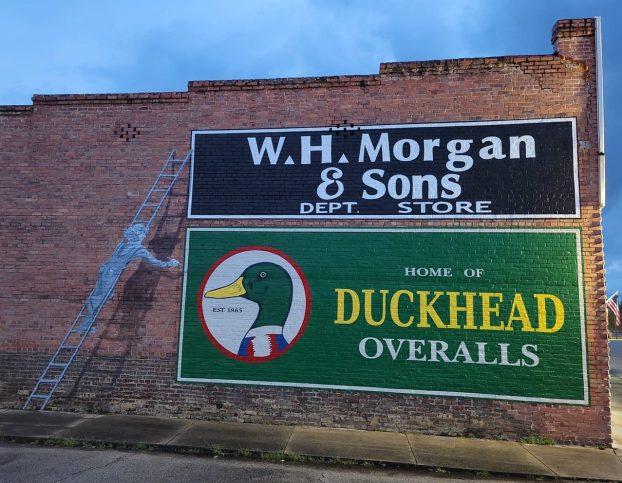 A photo of the mural after its completion

Georgiana resident and owner of A Color Affair, Michelle Tuttle Black, set out with a goal of recreating a beloved mural in downtown Georgiana more than three months ago.

After seven days of hard work, the mural is finally restored to its former glory.

The mural, painted on the former hardware store, advertises the Duckhead clothing and shoe brand.

Duckhead began operations in 1865 by brother George and Joe O’Bryan. The brothers came up with the idea of using surplus army tent material as work pants. The Duckhead brand has had a long history of producing quality products for both civilian and military purposes.

Black said that a lot of hard work went into recreating the mural of such an intriguing southern-based company.

According to Black, the first step began with a hunt for old photographs showing how the mural used to look.

After a lot of communication between herself and community members, Black found what she was looking for.

She could now begin the next step of the process.

Due to the size of the mural, Black knew she was going to need a lot of material to get the job done.

To acquire the necessary materials, Black turned to crowdfunding.

On Friday, May 28, Black created a GoFundMe page with a donation goal of $2,000 to purchase everything she would need.

“The mural brings back fond memories for those that lived or visited Georgiana, Alabama back in the day, and yet, to this day, people still look for it or talk about it,” Black wrote online.

“I would like to paint the mural to make it look like it never faded, never disappeared, never went away,” she added.

“Maybe it’ll help the town bring an area back to life that was once the place to be.”

Black said her desire to help Georgiana inspired her to paint the mural.

“There are so many people trying to bring Georgiana back to what it was,” Black said. “Anything that I can do that can help with that I am more than happy to do.”

After announcing the mural’s completion, people quickly thanked Black for all her hard work.

Black says it was heartwarming to see everyone so happy.

“I’m happy for the community,” Black said. “I’m especially happy for the older folks who were here to see the mural when it first went up. It’s nice to see people rally together to get things like this done.”

Black said the restoration has even given Georgiana some additional attention.

“The story of the mural being recreated went national,” Black said. “We’ve had people coming from all over to see it. We even have a representative from Duckhead coming down to take pictures. Local businesses are especially excited about all this because it has allowed them to get some more exposure.”