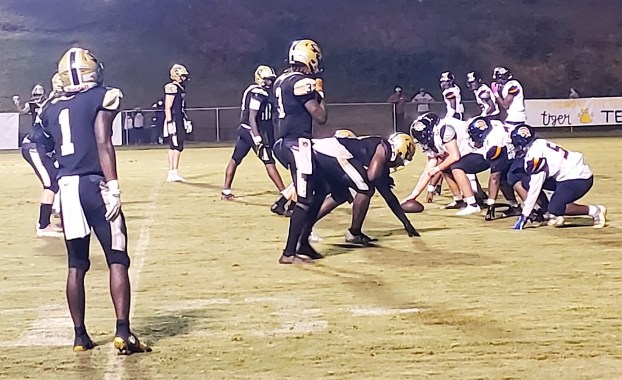 Tigers defense getting in formation

The Greenville Tigers secured a 15-point victory during their first region game of the season against Charles Henderson.

The game’s first score occurred when Henderson quarterback Parker Adams threw a 14-yard touchdown pass in the opening seconds of the second quarter. After securing the extra point, Charles Henderson led the Tigers 7-0.

The Tigers tried running for a first down after gaining possession of the ball at their 27-yard line but were blocked by the Henderson defense.

Pushed back to their 23-yard line by the Henderson defense, the Tigers punted it away. Henderson then took control of the ball near mid-field.

Despite getting the ball at the 21-yard line, the Tiger defense was able to keep the Trojans out of the end zone and forced them to go for a 37-yard field goal. After a successful kick, the Trojans led the Tigers 10-0 halfway through the second quarter.

Getting the ball back at the 20-yard line due to a touchback, Laquan Robinson secured the first down for the Tigers. Despite some pushback from the Trojan defense, they scored after Andre Davidson threw a 75-yard touchdown pass to Jacob Foster.

At the end of the first quarter, the Trojans led the Tigers, 10-6.

Halfway through the fourth quarter and positioned at the Henderson 26-yard line, the Tigers managed to run the ball to the five-yard line thanks to freshman running back Ty Phillips.

After some pushback by the Trojan defense, the Tigers were looking at third and goal with just inches separating them from a touchdown.

Philips was then handed the ball and managed to secure the touchdown. The Tigers led the Trojans 19-10.

Following the kickoff, the Tiger defense prevented Charles Henderson from rushing the ball down the field. Facing fourth and ten at the 45-yard line, Charles Henderson attempted a fake punt, but the ball was fumbled and then intercepted by Brandon Bogen, who took it back to the house to further the Tigers lead.

Now up 25-10 with just minutes left in fourth, the Tigers successfully held off the Trojan offense to secure the win.

The Tigers will face off against Headland in their third away game of the season this Friday.