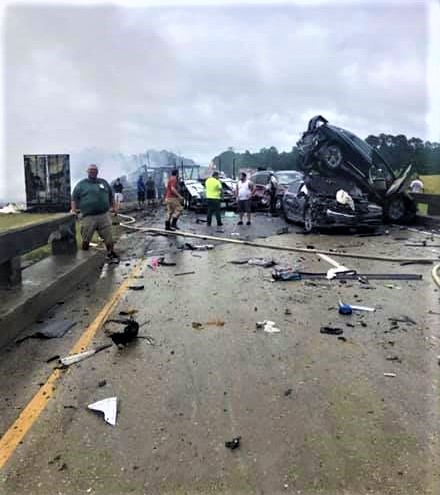 A lawsuit has been filed against two trucking companies and a truck driver by Beasley Allen Law Firm. The lawsuit was filed on behalf of the driver of the Tallapoosa Girls Ranch van and the families of five children who died in the wreck.

“The defendants, in this case, were negligent and displayed a complete disregard for the lives of fellow travelers around them,” Greg Allen, the Lead Products Liability lawyer, said. “As a result, 10 people died that day, including eight children who were trapped in a van driven by our client Mrs. Candice L. Gulley. Those children burned to death needlessly. It is hard to imagine a more tragic or gut-wrenching set of circumstances, which demand justice and accountability to the fullest measure.”

The National Transportation Safety Board released its preliminary report on the deadly crash the beginning of the month. The report is as follows:

On Saturday, June 19, 2021, about 2:20 p.m., a 2020 Volvo truck-tractor in combination with an empty 2020 Cottrell auto transporter (CMV-1), operated by Hansen & Adkins Auto Transporter (Hansen), was traveling north in the right lane of Interstate 65 (I-65) near Greenville, in Butler County, Alabama, approaching the bridge over Pigeon Creek, near milepost 138. Traffic north of the bridge had slowed and stopped, forming a queue, due to a series of minor crashes.

As it encountered the traffic queue, CMV-1 struck a 2020 Ford Explorer (SUV) in the queue, which was occupied by a driver and three passengers. After this initial impact, CMV-1 veered to the left, striking a Ford F350 transit van (van) occupied by a driver and nine passengers. After striking the van (and other queued vehicles), CMV-1 struck the left bridge rail and continued into the median beyond the north end of the bridge, coming to rest with a portion of its trailer in the roadway.

As a result of being struck by CMV-1, the SUV overturned and struck several other vehicles in the traffic queue before coming to rest in the roadway. Following this series of collisions, a 2005 Freightliner truck-tractor/2009 Wabash dry trailer combination unit (CMV-2), operated by Asmat Express (Asmat) came upon the stopped vehicles, veered left, struck and mounted the left bridge rail, struck the van, and came to rest in the median. The van also came to rest in the median, facing south, between CMV-1 and CMV-2. As a result of the multiple collisions, a fire ensued. Fire consumed the combination units, the van, and three other vehicles.

The lawsuit names Hansen & Adkins Auto Transport and Asmat Express of Clarkston, Ga., both identified as being involved in the crash. The driver, Mamuye Ayane Takelu, who was driving the Asmat Express truck was also named in the suit.

Hansen & Adkins Express declined to comment. Asmat did not respond to messages seeking comment prior to print.

The below comments were released this morning from Superintendent Joe Eiland regarding the decision of the BOE to require masks... read more