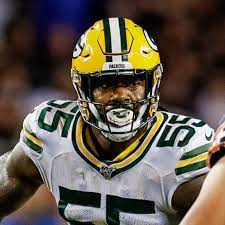 Training camp kicked off Wednesday, July 28 and will continue this week, leading up to Family Night on August 7 at Lambeau Field.

Smith was added to the non-football injury list at the start of camp. According to Matt Schneidman of The Athletic Reports, Smith has been placed on the list for a back injury. Brian Gutekunst, Packers’ general manager, said the injury should be short-term and not a serious concern.

SportsMoney Rob Reischel has named Smith the number three most important Packer out of 30 players for the 2021 season.

Smith had one of the best seasons of his career in 2020 with 52 tackles, 12.5 sacks and four forced fumbles. He was also named to the Pro Bowl and led the Green Bay Packers in turnover plays.

After graduating from Greenville High School, Smith played college football at Kentucky, where he was selected in the 2015 NFL Draft by the Baltimore Ravens.

Smith signed with the Packers in 2019, a four-year, 66 million contract.

However, the team has exercised the automatic conversion option in his contract, converting a portion of his salary for 2021 to a guaranteed payment.

The conversion also pushes Smith’s cap number to more than $28 million for next year, leading to rumors that he may be cut or traded if he doesn’t sign an extension by next March.

At 28 years old, Smith still has many years of playing time ahead of him. Smith said he is looking forward to proving himself each and every year.

Marlon Davidson is ready to get back on the field after a rough rookie year where he battled himself and... read more