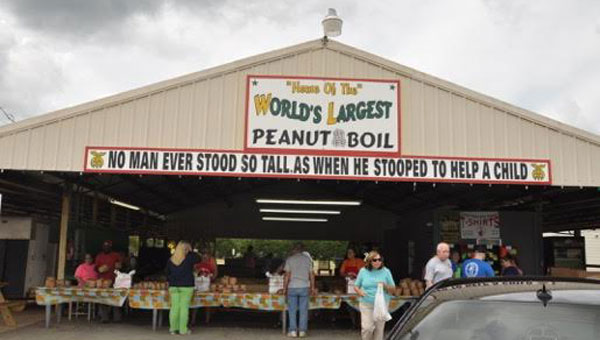 Another year, another peanut boil, but not just any peanut boil – The World’s Largest.

Although this year may seem different to the world, the Crenshaw County Shrine Club is continuing their annual Labor Day weekend peanut boil.

The idea started in 1970 as an event for a fundraiser and has been going strong every year since then.

Preparing for this event is a year-round task. Once Labor Day weekend is over planning restarts. For several years the club has been making at least 32 tons and they plan to keep that going. This year, they boiled 37 pounds. The Shriners get their peanuts from Holland Farms in Jay, Florida.

Over the course of the peanut boil, the lines were long, man stood in the summer heat waiting for their chance to get peanuts, some did, while others had to wait for them to make more. Others settled for parched peanuts instead.

“We had the biggest first-day we ever had,” Compton said. “On Wednesday, we usually have enough inventory to keep us going but the response was so good we lost our inventory. We really appreciate the support and apologize for the wait.”

Compton stated he enjoys getting together as a community and having fun while “FUNdraising.”

“We will like to thank everyone in Luverne and surrounding areas for making this event possible,” said Compton.