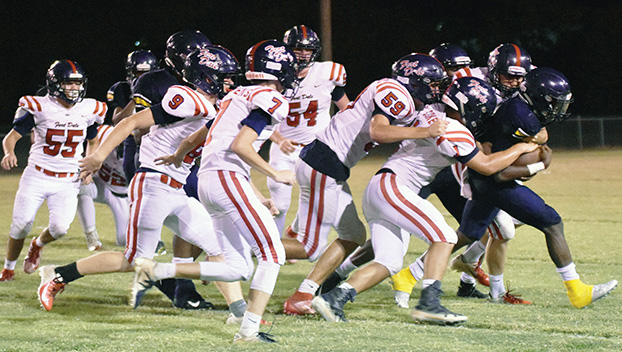 A win was a long shot for The Fort Dale Eagles Friday night at The Eagles Nest. Facing 1A powerhouse Jackson, Jackson never slowed down.

But if you ask coach Speed Sampley, one of the biggest goals of the season was accomplished.

“We just want to be able to play through this COVID,” the coach said.

However, it hasn’t gone as smooth as the hometown Eagles had hoped.

“We didn’t find out until around lunch on Friday that we would be without three starters due to COVID-related issues, so we had to scramble around, but our kids played hard.”

Fort Dale won the coin toss and took the ball first, but after that it was all Jackson.

On that first drive, Fort Dale would go backward all three plays, and the fourth would result in a fumbled scoop ‘n score by the visiting Jackson Eagles. His team, obviously oversized and outnumbered, quarterback Noah Pickens, just could not get his offense on track, and often found himself running for his life in the backfield.

“We made some mistakes early that put us in a hole, but our kids played all the way until the end,” Sampley said.

With 5:48 to go in the second quarter, Fort Dale managed their first, first down of the contest on a Pickens completion. However the drive would stall soon there after.

“Every chance Noah gets to play will be beneficial for him. I think he will be fine, just got to work on some mechanical skills,” Sampley said.

Pickens would finish the game 5-10 passing, with four of those completions going to his favorite target on the night, Nate Richardson.

After coming out of halftime up 34-0, it was obvious, Jackson was just trying to get out of Greenville as quick and safely as possible. The ball would stay on the ground the rest of the game, also seeing many substitutes.

One of few bright spots for Fort Dale was Sam Bloodworth.

He not only led the team with 10 tackles, but had multiple impressive soccer style punts with the ability to completely change field position in games this season.

Bloodworth finished the night with 10 carries for 94 yards, breaking lose for the teams only touchdown, a 54 yard scamper.

It is not known yet whether that game will be rescheduled.

The Highland Home Flying Squadron football team has been off to a rocky start this season, but Coach Will Pouncey... read more