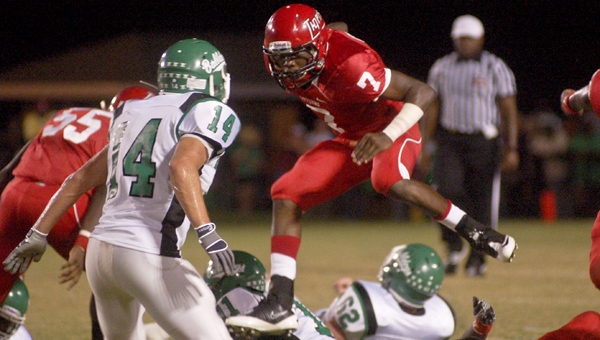 Luverne was plagued with fumbles and no offense and the Bulldogs capitalized.

About four minutes into the game, a fumble by Luverne set up series of plays that led to a Tucker Kilcrease pass to Taye Person putting the Bulldogs up 6-0.

The extra point was good by Carson Jones.

Another fumble put the Bulldogs on the board again when Kedrick Brown scored.

The extra point by Jones was no good, putting the Bulldogs up 13-0.

A celebration penalty gave the Bulldogs a 15-yard penalty on the kickoff.

Kilcrease got a 20-plus yard touchdown, putting the Bulldogs up 19-0.

Brantley elected to go for two, which was successful, Bulldogs went up 21-0.

In the second quarter, Kilcrease hit Robert Shine on a TD pass to go up 27-0.

Jones’ PAT was good, putting the Bulldogs up 28-0.

With 3:56 left in the first half, Kenuwyn Dixon caught a Kilcrease pass 8 yards out, putting the Bulldogs up 34-0.

Dixon took it in 50-plus yards for a touchdown down the sidelines, putting the Bulldogs up, 41-0.

Dixon caught a pass in the beginning of the third quarter to put the Bulldogs up 48-0.

He said that the weather played a factor in some turnovers for Luverne, but as with anything, you have to know how to overcome adversity whether it be the weather or COVID-19.

Brantley begins region play on Friday night on the road against Kinston.

Jones said that preparation this week has been a bit different than with Luverne.

Luverne coach Jason Rowell said the team is working on issues being a younger football team, but that the players are being steered in the right direction.

Regarding last week’s game, there are three things he’s been telling everyone.

“You can’t turn the football over five times and expect to win the game,” he said. “I want to tip a hat to Brantley, and there is still a lot of youth to our team. One game doesn’t define a season.”

The Tigers play Coosa Central for their first region game of the season.

It is also Senior Night at Glenn Daniel Stadium.

Back to the Gridiron

Crenshaw County’s high school football teams are gearing up to get back to the Gridiron. Last week, Luverne Varsity defeated... read more