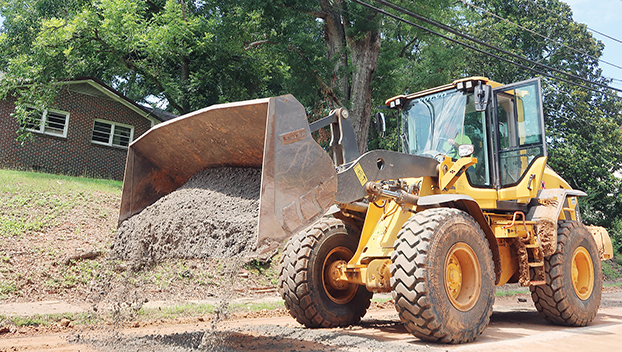 Crews continue to replace old water lines and rusted pipes throughout the City of Georgiana. | Photo by Amya Mitchell

The City of Georgiana broke ground on an infrastructure project late last month after receiving a $300,000 grant from the Community Development Block Grant Program. The grant is being used to replace old water lines and rusted pipes on Mill Street and Railroad Avenue that have been servicing the city for more than 50 years.

Mayor Jerome Antone said that he has been looking forward to the grant in order to protect the community from the consequences of ingesting water from old and rusted pipelines.

“Sometimes rusted pipes can cause lead poisoning,” he said. “We haven’t had that problem, but we wanted to try and combat that before it happens.”

The city has also had several problems with pipes bursting in the past due to complications associated with rusting. On June 20, a water line ruptured near the city’s Dollar General store. One main water line burst could affect the entire city.

“Old water lines can only take so much pressure,” Antone said. “When they rust out, that’s where the problem comes in. The main water line runs through half of Georgiana.”

Mill Street and Railroad Avenue are the first to have water line replacements, but the city’s water and maintenance supervisor Kenneth Blackburn has future plans to replace water lines throughout the entire city.

“We’ve already applied for the second grant and it was approved by the state,” Blackburn said. “Now, we’re waiting for Washington to let us know how much we’ll get.”

According to the United States Department of Housing and Urban Development, the Community Development Block Grant Program provides annual funds to cities, states and counties in order to provide a suitable living environment and by expanding economic opportunities. The project began on
June 24.

Fire hydrants and water meters will also be replaced with the water lines, according to Blackburn. The project should take no more than 75 days.

The Georgiana City Council is taking additional steps to stop the spread of coronavirus within the city. Last Tuesday, the... read more