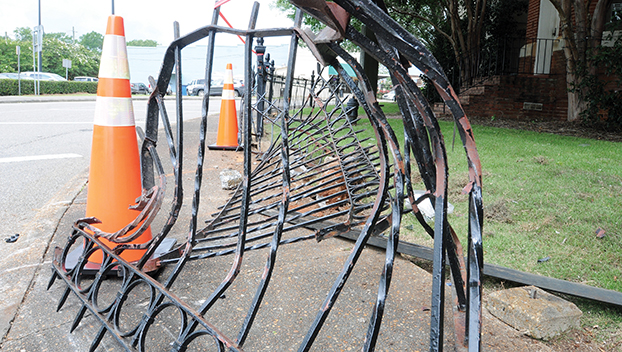 A vehicle driven by a juvenile crashed into the decorative fencing outside the Butler County Courthouse early Tuesday morning. | Photo by Mark Rogers

“Before the officer could get turned around and check the vehicle involved, it had wrecked,” Lovvorn said. “The officer got on the scene and the driver had left on foot. Officers talked to the passengers and determined who the driver was.”

The officers then searched for the driver and located him about two hours later.

“We located him and he admitted everything,” Lovvorn said. “All of the people in the car including the driver were juveniles. The driver was cited.”

Lovvorn said the 17-year-old driver was charged with reckless driving and leaving the scene of an accident.

“It appears to have been a case of bad judgment,” Lovvorn said.

Lovvorn said the crash remains under investigation and that they do not believe alcohol was involved.

“I think he was just distracted by the passengers,” Lovvorn concluded.