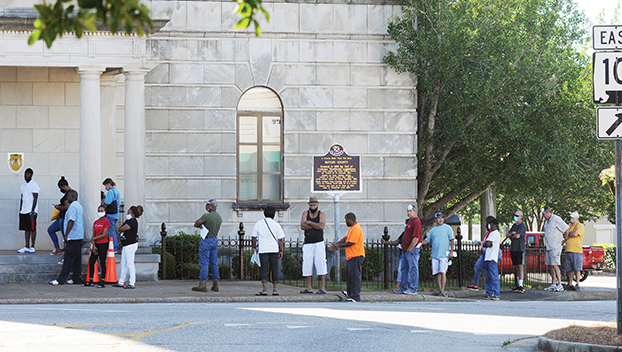 A long line forms in front of the Butler County Courthouse Friday morning, a day and a half after being reopened. | Photo by Mark Rogers

The Butler County Courthouse is open for business after more than two months of being closed to the public due to COVID-19 restrictions.

The Butler County Commission voted 3-2 last Tuesday to reopen beginning Wednesday, June 10, which was a half day. Since mid-March, patrons have had to conduct business by phone, mail or online, and as the doors opened this week, long lines due to COVID-19 guidelines have occurred.

“As you know, the courthouse has been closed since mid-March,” Commission Chairman Jesse F. McWilliams said. “Our employees have been doing a great job with the services that we provide in these offices.”

Those who want to conduct business with the various departments at the Butler County Courthouse will see many new rules in place. Due to social distancing, only a small number of people will be allowed in the building at one time. Each office is generally limited to only two people at a time and the entire building can only accommodate less than 20 guests at once. Also, masks are to be worn and a pair of security guards outside the door check temperatures and logs sign-ins. When a person leaves an office, another will be allowed in that spot.

Last Friday morning, lines stretched around the building and Butler County residents waited to get in to conduct business. During discussions last Tuesday, commissioners were concerned that the number of COVID-19 cases in Butler County was not declining or leveling off. The county also reached a sad milestone last Thursday with 25 deaths.

“I know everyone has opened up — or at least the vast majority of courthouses have opened up,” Hickman said. “I believe everybody but us and maybe Baldwin and Mobile counties are open. Not everyone has the same situation as Butler County has. No one has as many — on a population basis — COVID cases as we have. Despite our size, we are No. 9 in the state in COVID cases. Nothing has changed since the courthouse closed back in the middle of March. The virus has not lessened, it has not gone down for 14 straight days — it has not met any of the goals that we had hoped to do for reopening. In essence, nothing has changed other than the pressure put on the commission by the citizens to reopen the courthouse.”

Hickman suggested that if the courthouse had to be reopened to the public that it be open to only those who have to access the courthouse.

“That would be those who cannot conduct business by email, telephone or otherwise,” he said. “Those who have come in person to pay cash to renew tags, to pay fines or do whatever business they have to be done in person. They announce their business and they would be granted access. Those that can conduct their business without their physical presence should be denied access at this point in time.”

A motion to reopen the courthouse with guidelines that Sheriff Danny Bond and other officials had assembled was made by Commissioner Joey Peavy and was seconded by Commissioner Darrell Sanders. Peavy, Sanders and Commissioner Allin Whittle voted in favor of the opening measure, while Hickman and McWilliams voted against it.

Sheriff Danny Bond said Monday that he and the department heads were evaluating the procedures in order to keep the courthouse employees safe and to make access for the public as easy as possible.

“It’s been busy,” he concluded. “Our procedures are a work in progress and we had to tweak some things a little. It’s our goal to get everyone in and out as quickly as possible.”