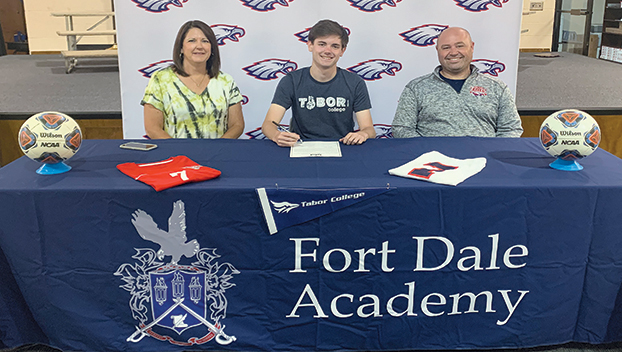 Despite an abrupt ending to an undefeated season, Fort Dale Academy senior soccer standout Hunter Teague earned a scholarship to shoot goals at the collegiate level.

The 18-year-old attacking midfielder and striker inked an offer last Friday,
May 15, to play for the Tabor College Bluejays in front of family, coaches, teammates and friends in the school’s library. The Hillsboro, Kan.-based college competes in the National Association of Intercollegiate Athletics in the KCAC Conference and Teague hopes to contribute to the team immediately, while earning his degrees.

“I think first and foremost, you have to consider education,” the 5-foot-11, 150-pound captain said. “I’m going to do my best to get the right degree that I want, but as far as soccer, I really want to break into the first team my freshman year as much as I can, work on my game and be a better player from it.”

Teague, the son of Stuart and Melissa Teague, plans to earn dual degrees in sports management and marketing as well as a minor in coaching. The Luverne resident admitted that attending college on an athletic scholarship is something that he never imagined, having already chosen the University of North Alabama as his college choice based on academics.

“It’s hard for me to imagine going to school to play soccer, especially on an athletic scholarship,” Teague said. “I already had my academic college figured out, but as coaches started looking at me and the film that I had from past seasons and the few from this season, it became a real option for me to go play somewhere else. It was just a long process to find the right school.”

FDA head soccer coach Josh Wildermuth has no doubt that Teague can make an immediate impact for the Bluejays (2-16, 1-11) simply because of his knowledge of the game.

“Hunter is like the field general,” he said. “When he’s on the field, everything gets directed through him. One of the things about him that makes him special is the fact that he is a student of the game. He watches it, he critiques it — even his own performances — so it’s kind of like an extra coach out there on the field, which is hard to find, especially in the South where soccer is not huge. His passion for the game is extraordinary.”

“It’s exciting — not only for me — but for him,” Wildermuth, who began coaching the team in 2012, said. “It’s also exciting for the school because we’re starting to put a brand of soccer out there now that is not just pure athleticism, but we’re putting out soccer players — guys that know the game, watch it and work on it outside of school on their own. Before I got here, there was none of that.”

The Eagles were 7-0 early in the season before school was abruptly closed due to the threat of spreading the coronavirus. Teague led the team with four assists and had scored five goals before suffering an injury in the fifth game.

“We were doing a really good job, but it was a crazy ending,” Teague said. “We were projected to win the state championship and we think we could have done it.”

Teague began playing soccer as a young child, however, took a break early in high school before hitting the field again as a junior. He attended Ezekiel Academy in Montgomery as a junior before returning to Greenville to finish out his high school career with the Eagles. The camaraderie with his teammates is what he’ll miss most.

“Going into the season, there was so much excitement,” Teague concluded. “We all grew close, especially my senior class and captains. What I’m going to miss the most are the game day feelings, talking about the game beforehand and the
practices.”

An official with Crowne Health Care of Greenville confirmed Tuesday morning that the Alabama National Guard was onsite earlier this... read more