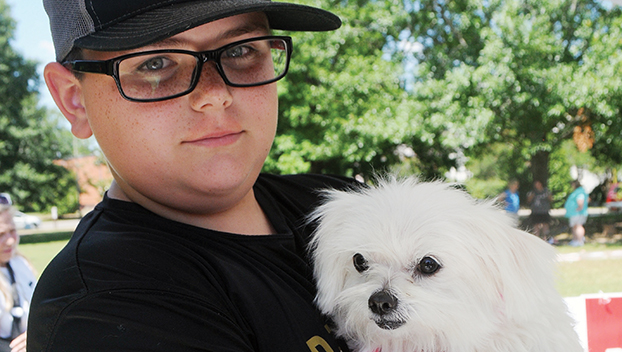 James Snell is pictured with Zoey during Bark in the Park 2019. | File Photo

Spring is a time full of festivals and events, and like many organizations, the Butler County Humane Society has been impacted by the COVID-19 pandemic.

BCHS Vice President Kimberly Matthews said much of the group’s fundraising is performed at events that have been canceled and it has an impact on its actions.

“Some of the events we’ve missed include Calico Fort where we raffle off a pet basket and babysit dogs if people bring them to the park, we missed the Medieval Festival where we host “Puppy Kisses” and raffle off a pet basket too,” Matthews said. “In all, we’ve missed about seven events. We also have Bark in the Park where everybody gets a prize. We have the possibility of $2,000 to $3,000 over the spring and we can only make up Bark in the Park and that’s primarily a non-profit event. We don’t make a lot of money on it, but it’s good for the public. At the other events, we’d sell T-shirts.”

Like many organizations, donations are dropping off during the pandemic.

“We had our donation drive in December,” Matthews said. “Now things are dwindling — it’s less and less. We still have the need. We have 14 puppies right now, more than 20 dogs and 100 cats at the Second Chance Rescue off Airport Road. We’ve actually had a rise in adoptions since the COVID-19 virus has been around, but there’s still a need. We’re still shipping some to Orlando and Tallahassee.”

Nevertheless, it is not just fundraising that has been impacted, according to Matthews

“Our juniors (Butler County Junior Humane Society) have missed out too,” she said. “They’ve done a lot of car washes to pay for their zoo trip. We’ve had to put it off twice and may have to put it off again because it was set for May 9.”

In 2019, the City of Greenville Animal Shelter took in 867 pets from Butler County. Of those, 47 were adopted to new owners and 368 were sent to rescues across the country. The Butler County Humane Society also helped spay or neuter more than 300 animals.

“We still hope to have Bark in the Park later in the year,” Matthews concluded. “We may have it in

Area first responders on the front lines helping patients fight the coronavirus and also preventing the spread of the deadly... read more