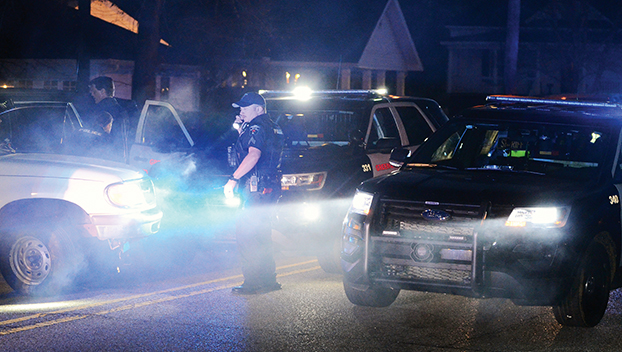 Two shoplifters led Greenville Police Department officers on a high-speed chase late Monday afternoon through the heart of Greenville that ended with the suspect being spun out by police chief Justin Lovvorn.

According to Lovvorn, at approximately 5:30 p.m., GPD dispatchers received a call from loss prevention at the Walmart SuperCenter reporting two suspicious black males that appeared to be shoplifting and were attempting to leave the store.

“Officers got there about the time that the two suspects were preparing to leave,” Lovvorn explained. “One of them had come out before the other one and got into a white Explorer and was already driving around in it — he kept circling by the Garden Center exit. About the second or third time that he came through, the other guy came out with a plastic tote full of stolen electronics and threw it into the truck and took off.”

Officer were arriving on the scene and immediately saw the subjects fleeing and attempted to pull them over in the parking lot, but the driver, who was later identified as 24-year-old Z’Davius Dumas of Greenville, refused, striking one of the patrol cars leaving the parking lot.

“He started a high-speed chase from there,” Lovvorn said.

Dumas led officers down Willow Lane to Manningham Road before turning on Fort Dale Road toward Downtown Greenville at the red light adjacent to CVS Pharmacy. There, he lost control of the SUV, struck another vehicle on Fort Dale Road, which caused it to veer into oncoming traffic and strike a second vehicle.

“It caused some minor injuries to at least two of the occupants in one of those vehicle, who were later treated and released from the hospital,” Lovvorn said. “The trailing unit in the pursuit stopped to help them.”

Dumas continued down Fort Dale Road at speeds topping 80 mph, leading two other patrol units that were joined by Lovvorn onto College Street where he swerved in and out of traffic recklessly as he made his way to Hilltop. Once at the water tower, Dumas turned toward Downtown before losing control and quickly making a U-turn behind the Hill Top Food Mart and returning to College Street travelling back toward Fort Dale Road.

“I saw that they did that, so I cut off in front of the store to cut them off, and fell right in behind them when they came out from behind the store,” Lovvorn said. “At that point, I accelerated to max speed and then went to get beside them to end the pursuit since they had already caused one accident and hit a patrol car. They then tried to swerve over to hit my front end and made contact with me, so that’s when I decided that the safest thing to do was to end the pursuit right then, so I went ahead and did a PIT maneuver and stopped the vehicle.”

Once stopped, officers quickly surrounded the vehicle and took Dumas and his passenger, Rodriquez Garth, 18, of Montgomery, into custody without incident. Both were charged with felony shoplifting since the items stolen exceeded $500. However, Dumas was hit with a much longer list of additional charges including, two counts of felony hit and run, four counts of reckless endangerment, attempting to elude, resisting arrest and driving while suspended.

All of the stolen property was recovered.

Lovvorn said the incident could have ended a lot worse, adding that he was proud of his officers.

“I think that they did an excellent job at not only apprehending the subjects in the case in the safest possible way, but also assisting those that were involved in the accident that the suspect caused,” he concluded. “Luckily, we were able to keep them from seriously hurting someone.”

Tonight, Monday, Feb. 3, the Greenville Lady Tigers varsity basketball team faces off against Carroll in the first round of... read more