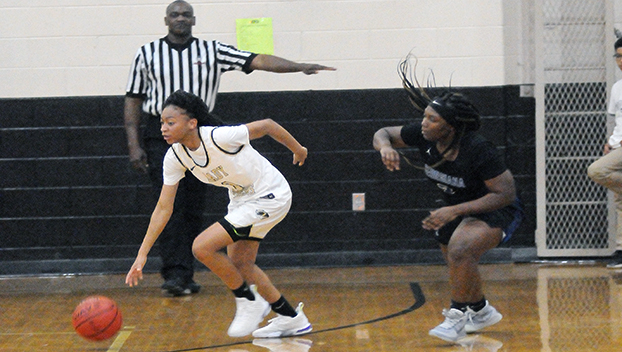 Tonight, Monday, Feb. 3, the Greenville Lady Tigers varsity basketball team faces off against Carroll in the first round of the Class 5A, Area 3 Tournament. Charles Henderson is hosting the event with Greenville’s tipoff scheduled for 5:30 p.m.

During the regular season, Greenville and Carroll matched up twice, with the Lady Tigers winning both contests. However, head coach Lavarus Peagler isn’t looking past the Lady Eagles, and wants his team aware of the situation.

“Two years ago, we had lost to a team twice in the regular season, we turned around and beat that same team in the Area Tournament,” Peagler said. “We cannot overlook Carroll, but my team knows this. We’re ready.”

Immediately following this game, Charles Henderson and Rehobeth face each other. The two winning teams will meet in the area championship at 5 p.m. on Wednesday, Feb. 5.

Also tonight, McKenzie’s varsity girls face off against Red Level in the first round of the Class 1A, Area 2 Tournament. Game time is 5 p.m.

Despite a rocky season up to this point, McKenzie can still qualify for state with two victories in the tournament. Awaiting this game is the host of the area tournament, Georgiana.

With a strong area record of 7-1 the Lady Panthers are set to tipoff at 6:30 p.m. on Tuesday, Feb. 4, against the winner of the McKenzie and Red Level game. Unlike McKenzie, the Lady Panthers only have to win one game to qualify for the state tournament.

The championship game will be held at 5 p.m. on Thursday, Feb. 6.

McKenzie’s boys will go up against Pleasant Home at 6:30 p.m. tonight at Georgiana. The host Panthers will play the winner of that contest at 8 p.m. on Tuesday, Feb. 4.

A domestic incident in the Town of McKenzie turned into a substantial drug bust for the Butler County Sheriff’s Office... read more