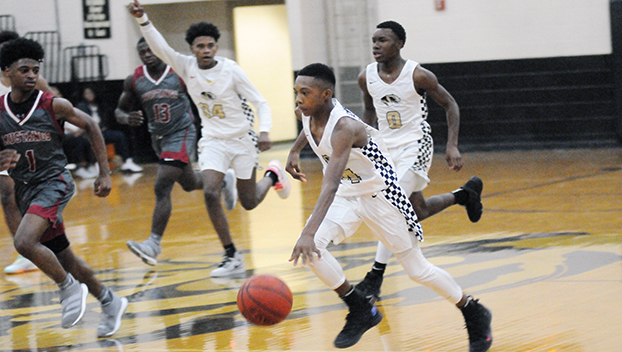 Greenville's Tyler Mallory dribbles and drives to the basket against Stanhope Elmore. | Photo by Mark Rogers

Greenville High School’s basketball season got off to a good start for both the boys and girls teams, which notched wins over Stanhope Elmore last Thursday night.

The boys raced out to an 85-57 win under coach Marcus Mickles and the girls squad, coached by Lavarus Peagler left the court with a 57-47 win.

For the Tigers, Jadakiss Anderson scored 27 points to lead the way and had seven three-pointers. Dawson Sarblah had 20 points and 10 rebounds. Jovala Ocean led the Lady Tigers with 28 points.

“We’re really excited about this season,” Mickles said. “We have high expectations. We’re returning three starters and three guys that played a lot last season. We’re looking to do some good things this season. One of our goals this season is to win the area tournament. We’re going to start there and move forward from there.”

“Right off the bat our schedule is pretty tough,” Mickles said. “We started off with Stan Hope Elmore and then we’re headed to Mountain Brook to play Gadsden City in their tournament. We also will play Paul Bryant and local rivalries with Calhoun and Georgiana.”

Peagler said his squad is ready for the season.

“We definitely want to play hard,” he said. “We’re going to press and do a lot up and down the floor trying to get easy baskets. We’re just looking to get better each and every game. We’ve been focusing on playing really well in area contests and hopefully making a run during tournament time.”

Mickles said he’s looking for many players to contribute this season.

“We play a very team-oriented style of basketball,” he said. “I expect all of my guys to step up and make contributions this season. Dawson, Kevin Brown, Jadakiss are all going to do a lot of scoring. The person who kind of makes it go is Deion Hawkins – he does a good job – he’s the man to make the ship go.”