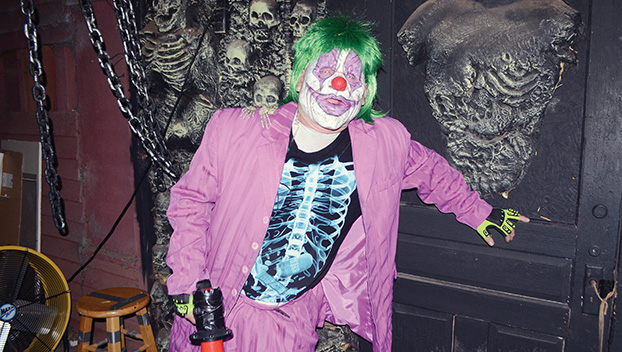 Jack the Clown greets visitors to the Greenville Haunted Firehouse as they enter the first of 30 rooms featured this year. It is the Greenville Firemen’s League’s 16th year sponsoring the attraction. | Photo by Adam Prestridge

For nearly 20 years, a group of gruesome ghouls, whacky witches and crazy clowns have been gathering at the old farmhouse on Norman Road in late September anxious to usher in Halloween one scare at a time.

The Greenville Haunted Firehouse opened its creaking doors two weeks ago to a large crowd of fright seekers ready to see what this year’s group of volunteers had up their cloaks this season.

“So far it has been a good turnout,” John Haire, president of the Greenville Firemen’s League, said Monday. “We’re getting people from Millbrook, Prattville, Montgomery, Florida — we had some this weekend come up from Louisiana. Our haunted house is a family-oriented haunted house, but it’s not a kid-friendly haunted house; we’re going to try to scare you the best that we can. We’ve got something for everybody’s phobia.”

“We started it as a fundraiser because we were doing the ‘Fill the Boot’ Drive for the MDA and, as you know, when that comes around, it’s always hot,” Haire said. “Everybody got tired of standing outside sweating, so we came up with the idea to do a haunted house and I was tasked with finding a place for it.”

Haire discovered the old farmhouse, located at 1198 Norman Rd., and knew right away that it was the perfect setting for a haunted house. Kenny Solomon Jr. allows the
Firemen’s League to use the house for its yearly, six-week scare factory.

“His dad (Kenny Solomon Sr.) told us that as long as we could use it for something for the kids in the community, we could use it as long as we want to,” Haire said. “He’s been very generous since his dad passed, he’s continued the tradition. He comes out there and plays with us as well a couple of nights a year.”

The Haunted Firehouse, which features 30 rooms inside and out this year, opened Friday, Sept. 27, and will remain open every Friday and Saturday night through Oct. 26. It will also be open on Halloween night, Thursday, Oct. 31. The cost of admission is $8 on Friday nights and $10 on Saturdays.

“We try to go up a little bit on Saturday to push people to Fridays a little bit because on Saturdays, we’re having anywhere from 1,000 to 1,500 a night,” Haire said. “As long as you’re in line by 11 p.m. — we’ll put one of our people behind them — you’re guaranteed to get in. Depending on how motivated you are, it takes anywhere from 20 to 40 minutes to go through it.”

The Haunted Firehouse also has a “Chicken Out Policy” where no refunds will be given after the purchase of an armband.

All of the characters performing in the Haunted Firehouse are volunteers, according to Haire.

“No one gets paid,” he said. “Usually there is anywhere from 50 to 80 actors out there at any given time. Sometimes we have a lot, sometimes we don’t. It’s just based on who all shows up. That’s the only problem – some of our friends up north — they pay their actors, so it’s just a job they’re coming to.”

“A lot of the money is used in the community behind the scenes,” Haire said. “Hospice contacts us a lot for families in need and we help with that. We’ve bought batteries for scooters for people; just different things that people in the community need.”

However, not all of the money raised is donated. Haire said a portion of it each year has to be used for upkeep and repairs of the haunted house and the purchase of new props and costumes.

“It’s very worth its while,” he said. “We’ll take a portion of the donations and put it back in the house and buy bigger props. Like the Grim Reaper, it was almost $3,000 by itself.”

One of the group’s recent purchases was a metal detector that all guests have to walk through prior to entry into the haunted house.

“We want to make sure it’s safe for the family’s coming in,” Haire said. “There’s also roughly 30-something cameras out there, so it’s very well guarded during operation times. The house is fully sprinkled, which is a state law for a ‘dark’ attraction or place of amusement.”

Training is also key to the Haunted Firehouse’s success.

“Every year, we try to go to a bunch of classes, they’re usually in January and this year it’s in New Orleans it’s called HauntCon,” Haire said. “A lot of the haunted house industry people are there as a trade show, but they also do classes and show us how to build our own animatronics, set up air lines, lighting and set decorations. We get a lot out of classes from that. In June, we go to Midwest Haunters Convention, which is up in Chicago and we’ll take a group of us and we’ll sit in different classes and it’s usually about four days of classes and a trade show.”

Setup for the Haunted Firehouse begins in January, according to Haire.

“We take off November and December, and then we’re right back out there in January,” he said.

As for the future of the spooky attraction, “as long as we can holdout and our bodies will hold out,” it will continue yearly, according to Haire.

“We’re all up in our 50s now and it’s taking toll,” he concluded. “We would love to have more volunteers. If you’re 17 and up, it makes it a lot easier because you don’t have to have a parent there, but we have kids that start out much younger.”

A breakfast, medical advice and a balloon launch all helped kick off Breast Cancer Awareness Month last week at the... read more