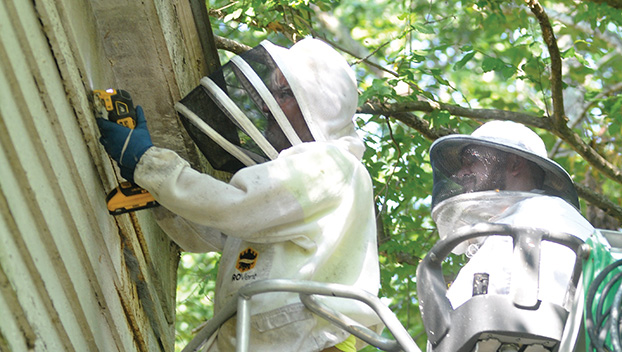 Ben Vandortrecht, left, and Patrick Michael Johnson worked to remove boards from the side of the historic Hopewell Baptist Church in Lowndes County last Saturday morning. The church was infested by a large swarm of bees. | Photo by Mark Rogers

There was a lot of buzz surrounding a historic rural Lowndes County church just minutes from the Butler County line last Saturday.

Beekeepers and volunteers were busy removing tens of thousands of bees by carefully removing the outer boards of the Hopewell Baptist Church building just off AL-21.

The owner of the building, the nearby Snow Hill Christian Church, hopes to restore the old church, built by enslaved workers in 1832, and make it a special place to for people to visit to see a recollection of the past.

“This property was given to us for $10 in March 2008,” Pastor Dale Braxton said. “The last surviving member wanted us to have it and we have tried secure it and find money to restore it. In 1832, there was a Rev. Lee who owned slaves here. There were 67 African-American slaves that were members of this church. They had to climb up into the slave gallery to worship with the approximately 100-something white members here. I often think about the Martin Luther King Jr. story when he said that Sunday morning was the most segregated hour of every week. Think of it — if the 67 African-Americans wouldn’t have had to move up to the slave gallery — if they just could have been together on Sunday mornings. What and awesome experience could have taken place.”

Braxton said it is his hope and the hope of many others to use the historic location as an educational tool. Removing the bees from the structure was an important first step in preserving the building.

“We talk a lot about Civil Rights and what happened in the Civil Rights Era and sometimes we forget about those people who were enslaved,” he said. “This is a good opportunity to restore this to the original state with the slave gallery, so that schools, those who come to the Jonathan Daniels Pilgrimage in August and those who come in March to the reenactment of Bloody Sunday have an opportunity to come here and hear about slavery.”

Braxton said he has been working with several people including a descendant of the first pastor to find funds to restore the building.

“We believe that in order to eradicate racism, you have to start by being reconciled,” Braxton said. “Reconciling is so important to the Disciples of Christ. We are an anti-racism, pro-reconciliation church. We want to see this community — this state become reconciled.”

Recently, the Lowndes County Remembrance Coalition announced that the church site would be one in the county to host a special memorial.

“They wanted to place a marker on the Snow Hill site and we thought what a great idea it would be to place it on the Hopewell site,” Braxton said. “They would able to be able to see those who had been lynched and those who had been enslaved, and bring the two together and have a great opportunity for learning, not only for the children, but for the adults who have forgotten about the past.”

Volunteer Mallory Combest of Montgomery said she had become friends with Braxton and feels compelled to help with restoration work.

“The narrative is so powerful,” she said. “You have a structure here that was literally built from top to bottom by enslaved persons and then they were
relegated to the top of the building in the slave gallery where they were sweltering and forced to listen to a message where their enslavement is justified by the faith that they were being taught. To bring light to that truth and start a process to that reconciliation is something that I couldn’t shy away from.”

As Braxton and Combest spoke, Ben and Stacy Vandortrecht, owners of S&B Apiaries in Elmore, worked to put a lift in place to begin the bee removal. The pair had some special help for Patrick Michael Johnson and members if the Homeless Veterans Initiative of Alabama.

“From top to bottom, we have to remove the wood until they get down to the bottom of the hive and then removed a few boards further down to make sure,” Stacy Vandortrecht said. “They come down and we go up with the vacuum and we vacuum up a lot of the bees and start removing the honeycomb so it can be re-fed to the bees. The baby brood will be put into boxes here, so the vacuumed bees can be put right back with the baby bees. We’re moving their apartment – furniture and all.”

Johnson said the Homeless Veterans Initiative was pleased to be assisting S&B Apiaries with the process.

“We started an outreach about seven years ago,” he said. “This organization was founded by homeless veterans and it just grew from there. After we perform our outreach here in Alabama and get them stabilized, we begin to form business plans with them. We provide a platform for them and facilitate business plans homeless veterans, disabled veterans and first responders who have experienced trauma.  That way they can come to the farm — see the fruits of their labor — and develop a solid business plan before they launch it and they can use the farm to launch it.”

Next March, the program plans to offer apiary therapy, according to Johnson, hence the reason the veterans were working on the project.

“It required a very intense process to stay calm and be in the environment,” he said. “It’s going to be a really good thing for veterans who have experienced trauma because it almost forces them to compartmentalize their trauma and put it in a good place where they can focus and be attentive and do the job of learning about bees and being a beekeeper.  If they choose to go that route, they can become a master beekeeper and start their own apiaries. Stacy and I are working on a plan to facilitate that.”

“We try to preserve the boards, so the church can use them to put right back up,” she concluded. “We hope to save the bees because honeybee populations have experienced a steep decline due to pesticides and parasites, yet a large proportion of our food production depends on the bees’ pollination.”

The cost of the removal of both hives is approximately $1,200 and tax-deductible contributions can be made by visiting www.gofundme.com and
entering the search terms “Honeybee Extraction — Hopewell Church Project.” Any funds not used for the bee removal will go toward the restoration of the church.

For more information, contact the Rev. Braxton of Snow Hill Christian Church at (334) 412-4057, or braxtondale@hotmail.com

It’s about that time again, time for the Powell’s annual Pilgrimage to Alabama. Yes, it’s time for the Homecoming at... read more