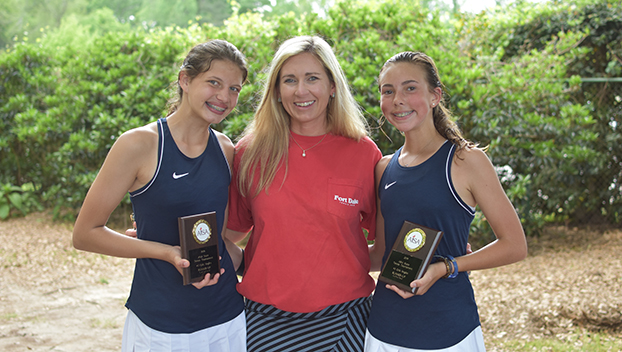 On April 8 and 9, seeds one through five competed in singles matches and then the top four paired off for first and second seed doubles.

Richardson was ranked third in the bracket and faced an opponent from Lee Scott in the first round and gained a victory. After the win, he went on to fall to Tuscaloosa Academy in the semifinals against the only player to have beaten him during the season. Stringer had a tough draw, according to coach Jennie Hamilton.

“He faced a player from Morgan Academy who went on to win state at that seed,” she said.

“Our first seed boys doubles team of Richardson and Stringer had an impressive win over Lakeside Academy in the first round,” Hamilton said.  “They advanced to the semifinals and faced Tuscaloosa Academy and had a tough loss.”

Rogers and Schofield at second seed doubles lost in he first round to eventual state champion Morgan Academy.

“2019 was a great year for Fort Dale tennis,” Hamilton said. “With all of the players we have returning, 2020 looks very promising for this Eagle team. I’m so proud of this group. They have worked hard and improved so much. We all enjoy being out on the courts tighter, and we are not ready for this season to some to an end. It was far too short.”

“I expect great things from these players in the coming years,” she said. “Not just the 10 players that competed at state. Our girls team, particularly has great depth and so much potential. I’m very excited about the future of fort Dale tennis.”

Hamilton also had some special thanks to offer.

“I want to than Elizabeth Matthews for helping coach this year,” she said. “We are so fortunate to have her lend her expertise. The players really listen when she gives advice on ways to improve their games. Having been a player herself and having coached several state championship teams, her time and tips are invaluable.”

There are lots of baseball and softball games going on in a variety of youth divisions around the city. In... read more