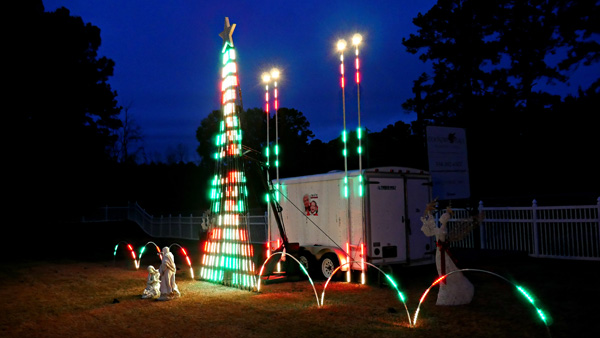 Hailing from Theodore and now making his home near White Hall in Lowndes County, Bob Wetzl, self-confessed computer geek, retired in January 2018 to “begin to live his dream.” And he brought that dream to Greenville last week to share with some of its senior citizens.

It all started with Wetzl’s natural “techie” skills fueled by a fondness for all things festive each December.

“I’ve always loved computers. And Christmas. And—this is what happened,” Wetzl said with a shy smile, nodding in the direction of the musical light show filling the front lawn of Country Place Memory Care with the vibrant colors and melodious sounds of Christmas.

He started experimenting with a light show around five years ago, and admits it was rudimentary in the beginning. “The first one wasn’t too exciting to watch, just lights turning on and off,” he said with a laugh.

But Wetzl persevered. And as time passed and technology both improved and got more affordable, his shows became longer and more complex.

He could hire himself out to share the light shows at events during the holidays. Instead, Wetzl prefers to go to nursing homes and assisted living facilities such as Country Place Memory Care to give them a week of Christmas magic through nightly hour-long shows–for free. On his YouTube Channel, titled “Age of Joy,” he shares videos of some of his art shows as well as his explanation for doing them.

“The Lord said, ‘Build it and they will come.’ But how can they come? They live in retirement homes and nursing homes and have no way to get out and see the lights, and that made me sad for them,” Wetzl said. “So, I decided I would take the joy of Christmas sights and sounds to them, instead.”

From children’s tunes like “Here Comes Santa Claus” to traditional carols such as “Hark! The Herald Angels Sing” and “O Holy Night,” a broad variety of Christmas favorites are featured in his shows, with the many LED lights synchronized to respond to the tempo of the melodies.

“At certain points, the spotlight also shines on the Nativity scene out in front . . . reflecting the reason we celebrate,” Wetzl explained.

Animation is also now a part of the show, with images marching, dancing and singing across the giant “tree” featured in the center of the light show display—everyone from the stately wise men on their camels to merry snowmen and Santa himself, as snow swirls or stars light up the “sky” above them.

And he’s not ready to rest on his laurels, either.

Wetzl’s eyes light up as he describes some additions he has in the works for his musical light show.

“They are finishing up an animatronic snowman for me. I was hoping to have it ready for this week, but not quite there yet. And the company I use is working on two animatronic angels for me,” Wetzel said. “They will have articulated wings and their mouths will lip synch to the music, too.”

Last Friday, he rose early to disassemble it all, pack it up and head for the “Art of Joy” Christmas Light Show’s next home for a week.

Wetzl is scheduled at several facilities around the state throughout the month of December.

And he couldn’t be happier.

“This is what I’ve wanted to do for a while—to share what I love for free with people who couldn’t have this experience otherwise.”

And seeing the wide eyes and looks of wonder on the faces of residents, as well as younger friends and family members visiting them?

For Bob Wetzl, that is priceless.

For many years, the businesses along Interstate Drive, Fort Dale Road and Willow Lane have had to deal with a... read more