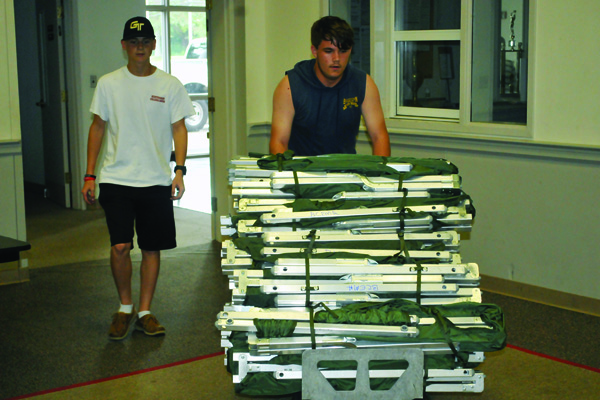 As Hurricane Michael prepares to make landfall near Panama City on the Gulf Coast of Florida, first responders in Butler County are planning to accommodate evacuees.

An estimated 130,000 people were in the mandatory evacuation zones of Florida. The northbound lanes of Interstate 65 became congested quickly as the evacuees headed north to get out of the dangerous Category 3 hurricane’s path.

At 4:30 p.m. Tuesday afternoon, the Butler County area was placed under a Tropical Storm Warning. While that specification is one to be taken serious, it isn’t near the conditions that were expected yesterday evening into today.

“We began setting up cots at the two churches yesterday afternoon in preparation for any evacuees who may arrive,” Butler County Emergency Management Agency Director Kris Ware said. “There’s no real way to tell how many people we will end up sheltering, but we want to be prepared.”

Ware said each evacuee would have to sign in and be documented.

“The churches will both be emptied by 10 a.m. Thursday morning,” she said. “That’s when the mandatory evacuation order will be lifted for those counties in Florida.”

“Our facility is considered one of the safest in the county by the EMA,” Clower said. “So, we have been a shelter before. I’m not sure how many, if any, evacuees will come here, but we are prepared to give them shelter. Our kitchen staff is also planning to cook and feed the people that may stay here.”

According to the National Weather Service, Hurricane Michael is expected to move quickly. Therefore, evacuees will be able to return to their home shortly after the storm passes.