Local church thanks officers for service 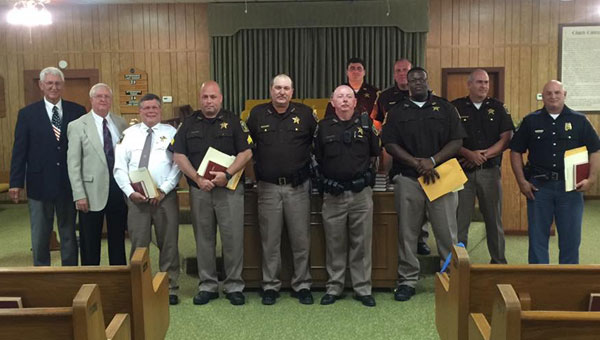 Over the recent months, law enforcement officials across the nation have been faced with adversity, but in the community of Crenshaw the support continues to roll in.

Recently, Siloam Baptist Church held a ceremony in which they took the time to recognize and honor the law enforcement of Crenshaw County.

“Policemen have been getting a bad rep, and I thought it would be a good idea to honor our law enforcement officers in Crenshaw County,” said Siloam pastor Harry Driggers.

The title of the sermon was ‘You are Ministers of God,’ and the focal verses came from Romans 13:1-4.

Officers were presented a gift certificate to The Chicken Shack in Luverne, an appreciation certificate and a Bible.

Driggers has had multiple family members serve in law enforcement, and knows firsthand the importance of showing them support.

“It’s a good feeling to know that we have them behind us and have their support,” said Crenshaw County Sheriff Mickey Powell.

“When you go in in the afternoon and turn the TV on, there’s been another shooting and the rioting is going on. We’re fortunate to live where we do, and we have good law enforcement like Luverne PD, Brantley PD, us and the troopers. It’s a good group; we work together and it shows.”

In a recent report published by AL.com, Crenshaw County was rated the fourth safest county in Alabama, based on indicators such as rates for assault, robbery, murder, burglary, vehicle theft and larceny.

“That speaks for all law enforcement in Crenshaw County. Everybody’s working together and pulling their share, and it shows,” Powell said.

“This community has always been close-nit as far as law enforcement. Everybody’s always got along and worked together. It makes you feel good to see your county in the top five.”

Angel Strickland has lived in Crenshaw County her whole life, and knew from a young age that she was meant... read more