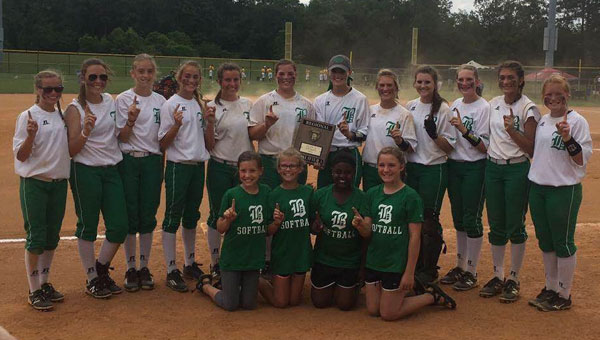 The Brantley High School Lady Bulldogs will head to the state championship tournament on Wednesday in Montgomery.

The Brantley High School Lady Bulldogs competed in the Girls 1A Varsity Softball South Regional Tournament this past week, and now have a shot at being named the 2016 state softball champions.

The Lady Bulldogs currently boast a season record of 33-9 after defeating Red Level, Millry and Kinston in the regional tournament.

“This is our third trip to state. We’ve overcome a lot of adversity. We lost four seniors, three that started for us, so we had some big shoes to fill, but we’ve done that well,” said Cindy Hawthorne, BHS head softball coach.

“We’ve had some young kids step up and play in some big spots, so I think we’re progressing to where we need to be.”

Twelve batters couldn’t locate Leanna Johnson as she threw a no-hitter on Thursday.

Johnson threw a no-hitter, striking out seven batters and walking none while recording her momentous feat.

Eight runs in the opening three innings allowed the Lady Bulldogs to easily put away Red Level. A passed ball, an RBI single by Kassidy Wilcox and a passed ball in the first inning supplied the early offense for BHS.

The Lady Bulldogs increased their lead with five runs in the third. The inning got off to a hot start when Alex Wilcox doubled, scoring Lainey Wells and Kassidy Wilcox. That was followed up by Olivia Jones’s triple, scoring Alex Wilcox.

Going into the second round against Millry, the Lady Bulldogs kept their fire stoked. In a shut out victory of 15-0, BHS boasted a total of 21 at bat, 15 runs, 15 hits and 13 RBIs. Johnson stayed strong on the mound with 43 pitches.

“Leanna Johnson pitched all three games and did a great job,” Hawthorne said.

Going into the third and final round, the Lady Bulldogs jumped out to an early lead on Kinston and captured a 7-1 victory on Friday.

Five runs in the first three innings allowed the Lady Bulldogs to put the game away early.

An RBI double by Kassidy Wilcox and an RBI single by Jones in the first inning supplied the early offense for the Lady Bulldogs.

“Alex and Kassidy Wilcox both had great days as well and played a great tournament. All together, it was three great team wins,” Hawthorne said.

Hannah Sims was solid at the plate for Brantley. Sims went 3-4, drove in one and scored one run. She singled in the first and third innings and tripled in the fourth inning.

The Lady Bulldogs got the win thanks in large part to Johnson’s dominant, seven-strikeout performance. Johnson allowed one earned run on four hits and one walk over seven innings.

It didn’t take long for Brantley to score two runs of their own in the fourth. The Lady Bulldogs scored on a sacrifice fly by Jones and an RBI triple by Sims.

“Gracie Free had a huge three-run homerun in the Kinston championship game to really break that open,” Hawthorne said. After winning the state championships for the 2014 and 2015 seasons, the Lady Bulldogs are once again ready to vie for the title as they start the tournament by taking on South Lamar at 9 a.m. tomorrow morning at the Lagoon Park in Montgomery.

SPECIAL TO THE JOURNAL: The Town of Brantley was recently awarded a President’s Risk Management Award by the insurance division... read more