GHS graduation moved back to stadium 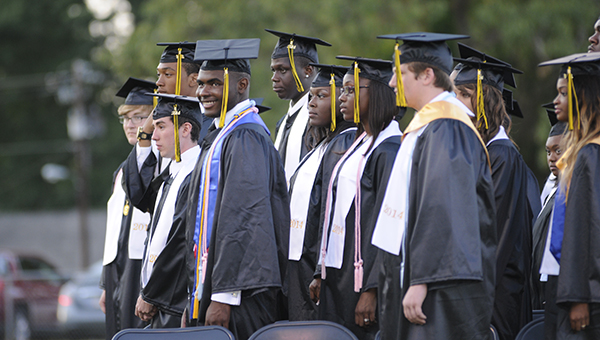 Greenville High School’s graduation ceremony will be held at Tiger Stadium, as originally planned, according to a statement released by the Butler County School System on Thursday. (File Photo)

Greenville High School’s Class of 2016 will walk across the field at Tiger Stadium to receive their diplomas.

The news came just one day after school officials released a statement Wednesday that renovations to the football field would force the school to hold the ceremony at an alternate venue such as the school’s auditorium or another football field in the county.

The renovations will involve grading of the field to create a crown, installing sprinklers, new turf and new fencing.

On Wednesday, Butler County Schools Superintendent Amy Bryan said that given the timeline officials were presented with, there was no way graduation could be held in the stadium.

“The work cannot be delayed as it is on a strict schedule to ensure optimal growing time for the new sod prior to the 2016 football season,” she said.

On Thursday, the school system announced via its Facebook page that graduation will be held at Tiger Stadium on May 21 as originally planned.

“We are pleased to share that the Greenville High School field renovation timeline has been set so that graduation can be held at Tiger Stadium on May 21,” Thursday’s statement read.

Greenville Mayor Dexter McLendon said the city is assisting with the project and that representatives with the Northport-based Sur-Line Turf, INC. that will oversee the work initially set a start date for the work that would have required the current turf on the field to be removed and a sprinkler system installed prior to GHS’ graduation ceremony in order to have the field ready for planting by the growing season.

“Nothing was set in stone, though,” McLendon said. “That was just the timeline we were given.”

As word of the change in venue leaked out, parents and students took to Facebook to share their displeasure.

“I am very upset about hearing that my daughter will not be able to walk across the Greenville High School football field due to renovations,” said Lataurs Posey. “I feel that it is wrong and unfair. They have waited 18 years to walk across that field. Last year was a bad experience for me. My son had to walk through the auditorium at Greenville High School. It was packed and very unorganized. My parents had to wait in long lines. Some people had more tickets than other people. The tickets were unfair. (My son’s) other relatives did not even get to see him graduate and they came long distance.”

“I understand things happen and we can’t control the weather, but we don’t even have that option,” said Middleton. “We haven’t even been ‘officially’ informed, and graduation is soon approaching. It’s a once in a lifetime experience and I just wanted to share that special moment with my family. It’s a tradition. I’ve been praying for the last couple of months that it wouldn’t rain, but It never crossed my mind that I would have to worry about renovations to a football field. I don’t disagree with the renovations, it’s just the timing is terrible. There are a lot of upset students and parents. It’s just sad. I hope this can get resolved.”

McLendon said that after revisiting the timeline with representatives from Sur-Line Turf, work on the turf can begin May 23 following the ceremony.

“We talked with them, and it’s going to be close,” he said. “There will be no margin for error, but we’re willing to take the chance so that graduation can be held at the stadium. From the beginning we wanted to do what was right and make the best possible decision. Everyone got upset and jumped on Facebook, but that’s not why we’re changing the date. The date was never set in stone.”

In the event of inclement weather, the ceremony will be held in the school’s auditorium, as has been the practice in year’s past, including last year’s ceremony.