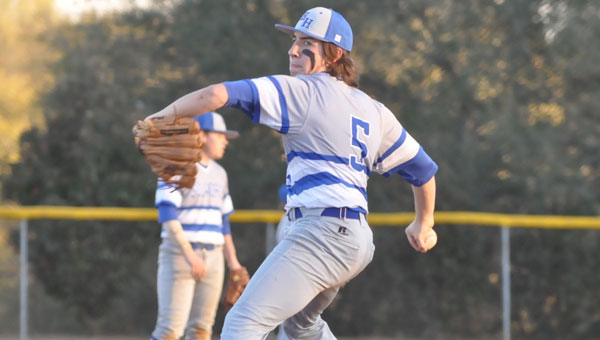 The Highland Home Flying Squadron remains at the top of their game, boasting an impressive 5-1 season record and a 2-0 area record. Currently, the Squadron has only fallen to the Brantley High School Bulldogs with the Bulldogs pulling out a grand slam in the final inning, pushing them to a final score of 13-1.

The Flying Squadron faced off against the Calhoun Tigers two games in a row on Monday and Tuesday and emerged victorious in both with a 22-1 and 7-1 lead.

“For the Monday night game, I was really happy with the way the team played. It was a great team effort,” said Highland Home School varsity coach Jonathan Jordan.

Monday’s game served as the home opener on the newly renovated field and also was the first area tournament for the Squadron.

The winning pitcher for game one was junior Chase Mansmann with five innings pitched, three hits, six strikeouts and one earned run.

This weekend, Highland Home School and Luverne High School will be hosting the Squadron/Tiger Spring Classic tournament at each school campus. These two tournaments will welcome local Crenshaw County schools, such as the Luverne High School Tigers and the Brantley High School Bulldogs, as well as schools from Samson, Pike County and Goshen. Samson, LHS and BHS will compete at Luverne on Friday, while Goshen, Pike and HHS compete at Highland. On Saturday, the tournament will finish at Highland.

The Squadron continues to prepare for upcoming games and the upcoming tournament by sticking to their favored technique.

“Like we always do, we’ll get one percent better. That’s our motto,” said Jordan.

So, who here likes to read? Personally, it’s one of-if not my favorite-pastimes. Over the years, I have come across... read more