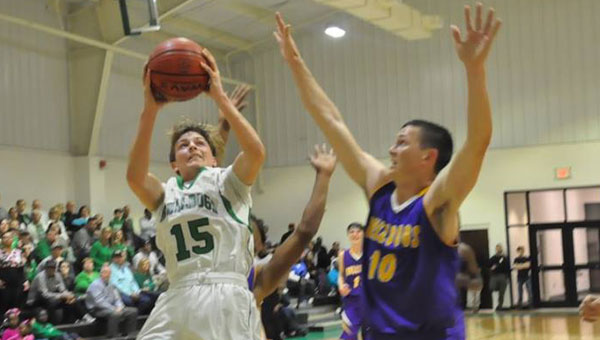 Brantley freshman Parker Driggers goes for a layup as the Blacksher Bulldogs close in. In a heated match between the Bulldogs, Blacksher proved victorious at 73-71with less than a second left in the game. (Photo by Beth Hyatt)

In one of the most heated games of the season, the Brantley High School Bulldogs matched up against the JU Blacksher Bulldogs to try for a spot in the area tournament. The Blacksher Bulldogs took the lead in the first two quarters of the game, but were faced with fierce competition from Brantley in the second half. In the end Blacksher proved victorious at 73-71.

The Brantley Bulldogs faced off against Kinston and Pleasant Home last week. After winning these two games, the team gained the title of area champions.

“That was a huge win for us at Pleasant Home. The big thing is, we started the season so slow. Me being a new coach, having a fairly young team we only had one win before Christmas. But our goal at the beginning of the year was to win the area. So we were really excited to win it,” said Andre Parks, boys varsity basketball coach for Brantley.

From this win, the Bulldogs went on to the Sub Regional tournament and faced off against the JU Blacksher Bulldogs Tuesday night at Brantley.

Both Person and Driggers played important roles in the fight against Blacksher with the continued occurrence of free throws.

With 12 minutes remaining in the game, the score was 72-71. However, with less than a second left, Blacksher scored a 2-point shot and triumphed over Brantley at 73-71.