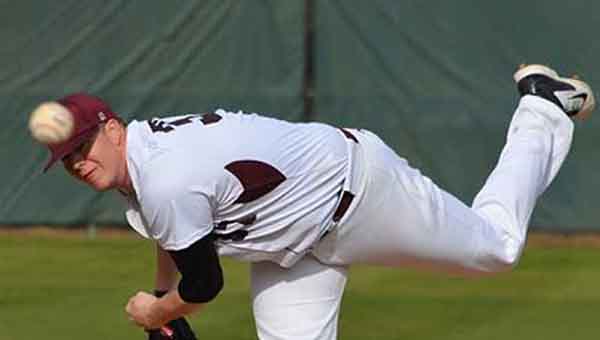 CONTRIBUTED PHOTO
University of Mobile pitcher Corey Hale was drafted by the San Diego Padres. He is a graduate of Luverne High School and a senior at UM.

MOBILE  — The University of Mobile’s Corey Hale was selected in the 28th round of the 2015 Major League Baseball Draft by the San Diego Padres Wednesday afternoon. Hale was pick number 12 in the round and pick number 837 overall.

“It feels awesome,” Hale said. “It’s what I’ve worked for my whole life. The reason every kid plays the game is to get to this point.”

He is the 15th Ram to be drafted all-time, and first since Jeremy Williams was selected by the Texas Rangers in the 2011 draft.

The lefthander turned in one of the best seasons ever at Mobile, going 14-1 with a 1.27 ERA and 124 strikeouts in 92.1 innings of work. He was named 2015 Southern States Athletic Conference Pitcher of the Year and First-Team NAIA All-American.

“14-1 shows great consistency,” UMobile head coach Mike Jacobs said. “He was always around the plate this year and could come back from behind in the count to get people out. Staying consistent for an entire season is a tough thing to do.”

The Luverne native held opponents to a .189 batting average and allowed two runs or less in 13 of 15 starts, including nine scoreless outings.

His 14 wins tied Kory Melancon’s single-season record and the 124 strikeouts is the third-best total in school history. Against Middle Georgia on March 15, he fanned 15 batters to tie J.C. Romero’s school record.

“San Diego is getting a humble kid,” Jacobs said. “With all of the success he had, he still came out every day and did what needed to be done.”

“I want to thank Coach (Mike) Jacobs and (Jon) Seymour,” Hale said. “Mobile was one of the few teams that gave me a chance and I believe that God led me in the right direction, bringing me to Mobile.”

This year a new non-profit organization has come into the county limits. The Smiling Hearts Foundation is a foundation to... read more